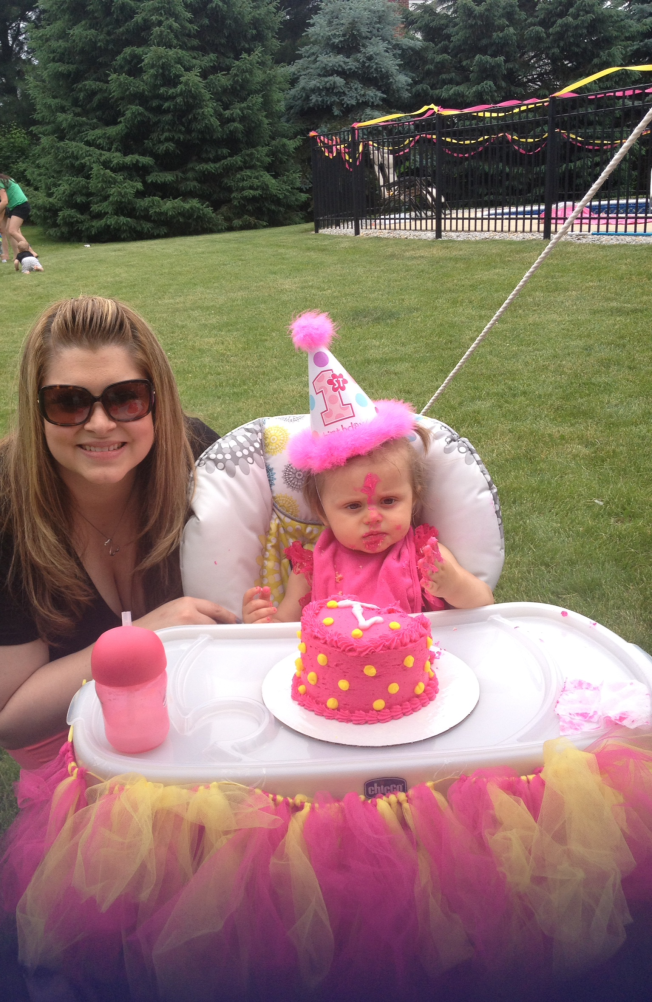 The sound of sweet giggles filled the air as two small arms flailed excitedly up and down. Emerysn’s hazel eyes lit up as the giant pink and yellow frosted cake bearing the number one was set before her. The clear, plastic cover protecting the cake was removed and before the blink of an eye, mini hands were tearing into the cake. Frosting covered her chubby, baby cheeks, dying her hands and arms a bright pink and cake crumbled to the ground as it missed her cooing mouth. Pink and yellow fingerprints soon covered every spare inch of the once white high chair and the once round cake, became a flattened mess.

Slowly, Emersyn’s excitement turned to tears as the birthday girl rubbed frosting into her eyes, her hair, and onto her clothes and soon the little one was headed for a nap…after many pictures were snapped to savor the memory forever.

Before we knew it the birthday party was over, just as quickly as the last year has flown watching Emersyn grow into a bright and curious one year old. Sharing this additional moment with her was just the frosting on the cake.

Slices of life from my different outlook on life

Inside the non-pinterest worthy classroom

Megan Bugg's journey through cancer as told by her father.

You can find me in the clouds...
scribbles & stickies

Life, Love and Everything Else

milbom40
mathcoachslicer
A Little Slice of My Life
Live life to the fullest!!
Nerdy Book Club

A community of readers

A "Slice of Life" Blog

Awesome things will happen if you stop being a miserable cow!

A meeting place for a world of reflective writers.

"Imagination is the highest form of research", Albert Einstein

Letters to my son

Journal of a wife, mom, and first grade teacher

Smile! You’re at the best WordPress.com site ever

Musings of a dad who runs from parenting, to become better at parenting.

Freeing yourself with a pen!

Musings from a Literacy Coach